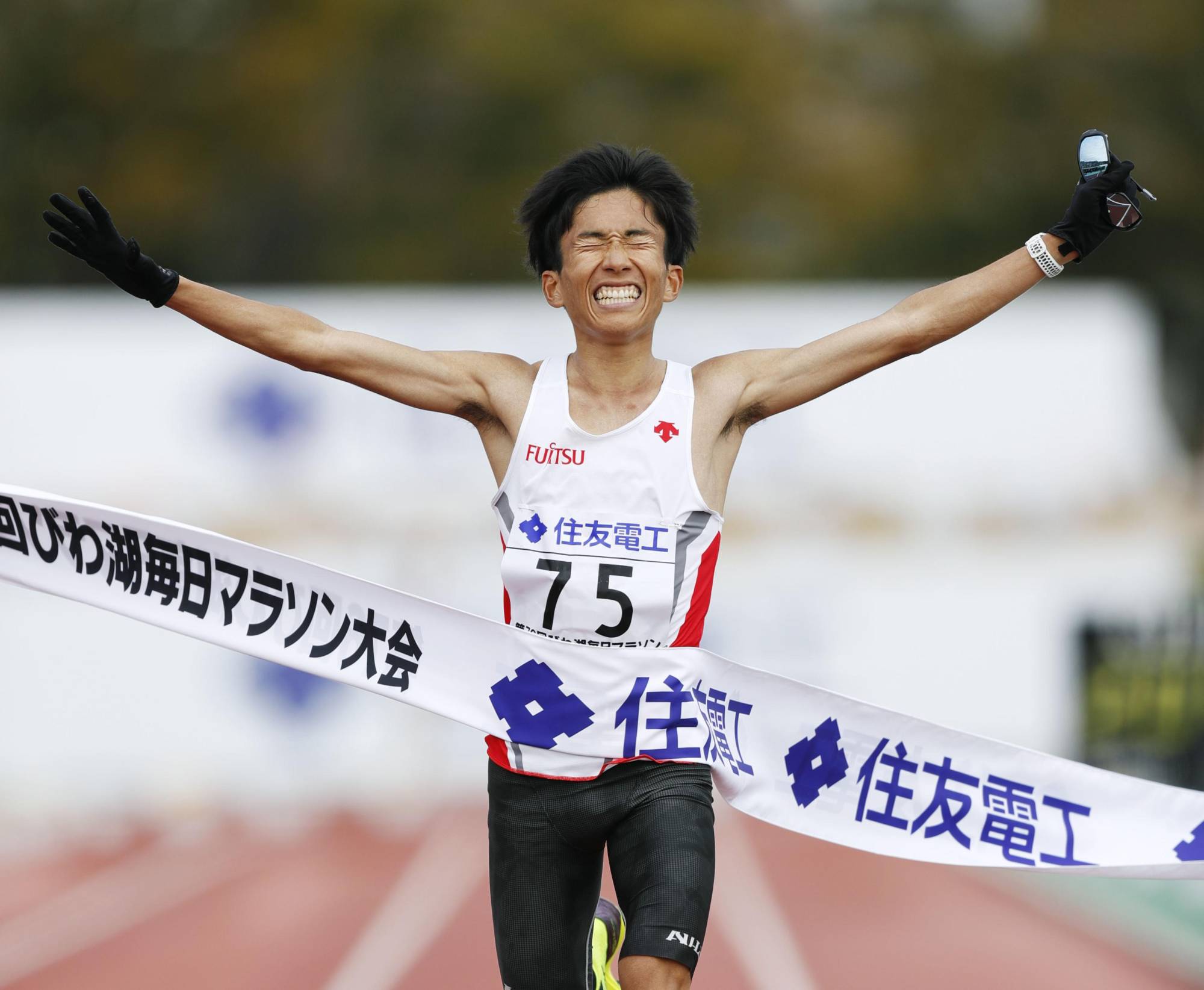 Are you all right?

If you follow top performances in marathon sport, you always end up with Kenyan and Ethiopian athletes, they occupy the all-time marathon times from 1 to 14.

And of course, in Belgium we can be proud of number 15 : Bashir Abdi and his recent European Record time of 2:03:36, in Rotterdam!

A country which we don’t read much about, but that I follow closely, is Japan .

Their national record is the 6th in the world , after Kenya, Ethiopia, and Belgium

For the sake of completeness, this list of national records is quite fascinating: in a number of countries Sub 3 is sufficient to smash the national record!

For example in Norfolk Island the national record stands at 3u30 (since 2002):

But back to Japan.

In Japan, running is a real obsession: with the ekiden they have a strong system to train young athletes.

Many young athletes can focus on their sport full-time (link to the blog about this), thanks to corporate funding.

Many Japanese runners don’t go outside their country, they run almost exclusively in Japan.

Running is the number 2 sport in Japan (after softball) and the “internal market” is so attractive that there is little need to compete elsewhere.

For those who regret that marathons receive (too) little media attention, take a quick look at the Hakone Ekiden : it is broadcast live on national television for two days . More than 60 million Japanese follow this event on television!

Remarkably, Japan has a long list of real top athletes, but without hitting the highest level (i.e. that of the Kenyans & Ethiopians).

The national record of Japan, which stands at 2:04:56, is held by Kengo Suzuki . He ran this record in the 76th running of the Lake Biwa Mainichi Marathon (on February 28, this year). It was also the very last edition of this marathon. Next year this marathon will be part of the Osaka Marathon.

Around kilometer 36, Kengo missed his drink station, and he viewed this problem as an opportunity:

“I was thinking of how I could time my breakaway. When I failed to grab my water bottle, I thought my only chance would be as the other runners drink, so I went for it” ( link )

It was a very quiet marathon, because of covid no supporters were allowed near the track.

Now, if you look at the results of this marathon, this is breathtaking :

Valencia also had some strong editions, but this is something else!

There are a number of explanations for this (a number of important Japanese marathons were cancelled due to covid, so all their best athletes came together at Lake Biwa Mainichi.

Curiously, in many articles in Japanese media, improved running shoes are put forward as an important factor!

“Everything was on. Conditions were good, light clouds, temperature was 7˚C, with 57% humidity, and a light breeze at the start. The lead trio of pacers hitting almost every split within a couple of seconds of the target. The shoes were good, across brands.”

It is striking how young these new kids on the block are, Kengo Suzuki is barely 25 years old. He is one of the Japanese runners who does run outside Japan, recently he finished 4th in the Chicago marathon.

It used to be a cliché that young athletes trained themselves to the bone, in top heavy schedules that focus solely on volume, with little or no variation in tempos.

But times are changing. For example, we read in an opinion article ( link ) that Japanese athletes (and their coaches) learn from what is happening elsewhere:

“As far as training goes, the stereotype of the old-fashioned high-mileage approach is still there to some degree, with college kids doing what would be considered marathon training elsewhere. But there’s a range of ideas and approaches informed by careful study of what works around the world . As one example, Yuya Yoshida , who debuted in Beppu-Oita in 2:08:30 last year at age 22 before graduating from Hakone champ Aoyama Gakuin University, published his training. Yoshida emphasized that he prioritized rest, recovery, and quality over just time on feet. While focusing on training for 5000m and 10,000m PRs in September, he did long jogs of 2 to 2 1/2 hours. Gearing up for Fukuoka, he did 40-km runs 4 times, plus half marathon and 30-km sessions with variable pace . The half marathons were in 5 sets of 3 km in 8:55 and 1 km in 3:35, and closing with 1 km in 2:45, and the 30 km in 6 sets of 3 km at 3:30~3:35 /km and 2 km in 3:00~3:02/km.”

Sometimes, Kenyan & Ethiopian athletes are claimed to have just the right DNA for long distance running. This is possible, but the Japanese also have their advantage, they are real lightweights, for example, if we look at the profile of Kengo Suzuki (link):

As mentioned, the Japanese system allows thousands of young athletes – with corporate sponsorship – to devote themselves full-time to running.

Financially, there was a twitch, recently! When Suguru Osako (a blog about this top athlete: Suguru Osako ) was able to break the Japanese record twice (Chicago Marathon in 2018 & Tokyo Marathon in 2020), he was given one oku yen, or one hundred million yen. That is around 750,000 euros, I think, a prize which the Japan Association of Athletics Federations (JAAF) granted to get closer to the world top.

However, when Kengo Suzuki was the first Japanese to dive under 2h05 … it turned out that the treasury chest was empty

“However, the funds for the program to give 100 million yen to Japan record breakers in the marathon have almost entirely dried up due to a series of record-breaking runs in recent years, and the program ended in March 2020 as initially planned when it was launched in 2015” ( link )

Well, if I may guess, there will be a wave of Japanese toppers, in the next few years. Next appointment (dixit Kengo Suzuki) will be the Olympic Games in Paris :

“I made careful use of speed and weight training. I was able to train well. “I’m really proud to have set the Japan record. Suzuki is now eyeing an Olympic appearance in three years’ time : “I’m practicing with Paris in my sights. I hope that I can gradually improve, in order to run with Japan’s flag on my kit”

We keep an eye on it!

If you have any feedback on this, I’d love to hear about it!