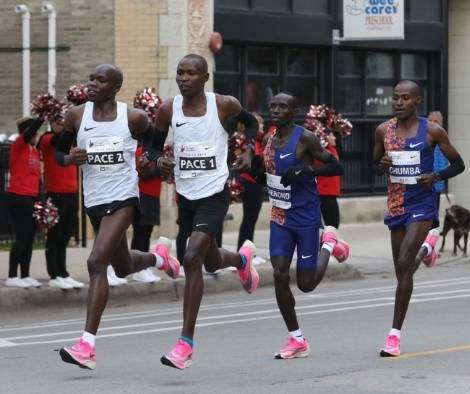 How did your recent marathon go? I hope everything went smoothly?

I ran the Lisbon Marathon, as a pacer. Jan did an excellent job, in his first marathon he ran 3h38, quite an achievement! For the sake of completeness, we have to add that Jan’s wife had come to support him, so failure was not an option :-). In any case, Jan ran as constantly as a Swiss clockwork, so he really didn’t need a pacer to begin with. In fact, I just had keep an eye on the distance!

And that’s exactly what I forgot! 🙁

To my surprise I noticed after 15 kilometers that we ran almost half a kilometer too much!

In the end, we arrived after 42.8 kilometers!

Pacers: who are they, why do they do this, and what do they come across?

In particular, if you are Eliud Kipchoge.

In various interviews Kipchoge indicated that his success in the Sub2 marathon (link to blogpost about this –  Sub2!) was due to his excellent support team, his new fancy shoes, and especially the pacers:

Of course this creates a lot of controversy, because one runner can afford to run with 41 pacers, and other runners cannot afford this. So that’s not fair, etcetera, etcetera, you can find an interesting article about this controversy here: Running Toward a More Equitable Future

Yes, dear readers, being a blogger is not always great fun, but pacer are even worse off! If they arrive faster than scheduled, they get criticized, because half of the runners had to drop out midway.

If they arrive too late, it is even worse.

When  a pacer decides midway to run the full marathon and then wins the marathon, all readers can imagine how happy the other participants are with this :-).

An example was Reuban Kipyego who decided to go for the win during the Abu Dhabi marathon, he pocketed a whopping $100,000: “Pacer Wins Abu Dhabi Marathon by 2 Minutes, Takes Home $100,000”.

At the Brighton Marathon, the organizing team had overlooked one small detail (Marathons – 5 blunders), the course was 500 meters too long. That triggered a lot of hassle, and in order to arrive within the set time, pacers had increased the pace, to the extent that nobody could follow the pacers.

Pacers defended themselves as follows:

At mile nine we went further up than we should have done and that added the extra distance. At that point we had to make a decision of if we speed up a little bit and we decided that actually delivering people at the finishing line at the correct pace, that was our job so to speak. There was an outpouring on Twitter and someone was accusing all the pacers of being rubbish, but we were caught in a dilemma! ( link )

Personally, I would have said:

Guys, we are going to stick to the agreed pace. At 42 km and 195 meters we all hit the “stop” button together, and then we will be fine, Strava-wise!

For example, there is this one lady Sharon McNary who often supported as a pacer and she asked here followers to sings songs:

I call out to the crowd as we’re going up a hill: ‘Heads up, shoulders down, nice easy arm swing, nice little short steps! (link)

Well. I don’t know how the readers usually feel after 35 miles, but as far as I’m concerned, I prefer not to explain what I would shout back at her! 🙂

So, what is the conclusion, now?

Perhaps we exaggerate the importance of pacers?

Hugh Cameron, who has been in the pacing business for +45 years says:

Kipchoge had three of the best pacers in the world (in Berlin, where he set his 2:01:39 World Record). Two dropped out very early, to the dismay of the organizers. The third pacer also dropped out well before the distance he was expected to run. So pacers didn’t end up being a factor. Any success a marathoner has, comes from the athletes themselves! ( link )

She believes that pacers are important, but not to the extent that we should distinguish two separate competitions for the ladies. (There is a category for women-only races (with only female pacers allowed), and a category “mixed”, where male runners can pace.)

My personal opinion on this?

I find races with pacers quite exciting, then the front runners immediately go all out!

And now, we would like to hear the opinion of the readers!

P.S. 1 : the  Dutch version can be found here: Marathon pacers